Teaching your child to read is a challenging and rewarding process. If your child has already developed phonemic and phonological awareness, they’re ready to start learning the connection between those sounds and the letters that represent them. In order to read, children need to develop specific decoding skills to help them recognize letters and the sounds that they represent.

Why is Letter Recognition so Important?

Letter recognition is an important step in pre-reading. Before children can start sounding out words, they have to possess letter recognition skills and phonemic awareness. English is composed of 44 individual sounds which are represented by 26 letters. Teaching these letter-sound relationships to your young child may seem intimidating, but we are going to break down the process into actionable tasks for you.

With a bit of planning and some background knowledge, teaching your child the ABCs can be fun and effective. Ready to start making leaps towards literacy?

The University of Oregon defines the alphabetic principle in two parts: Phonological decoding and alphabetic understanding.

Alphabetic understanding is the awareness that words are made of letters that represent sounds.

Let’s review what we already know about phonological awareness. We know that phonological awareness is a set of skills that children use to identify and manipulate units of speech, such as phonemes, words, syllables, and rhymes. Once children become competent in identifying and using oral speech sounds, they are ready to start connecting those sounds to the letters of the alphabet.

You’ll know your child has mastered the alphabetic principle when they can identify the relationships between specific letters and sounds. The relationship is reciprocal, for example, a child should be able to answer the following questions:

What sound does the letter B make?

What letter makes the “buh” sound?

So how do you help your child develop an understanding of the alphabetic principle? We will go over specific tasks and activities for you to use, but there are some general principles to keep in mind: make learning time fun, don’t teach the letters in alphabetical order, and use visual aids or hands-on projects.

Learning is all about making connections. That “ah-hah!” moment when a child makes a connection between new information and previous information can be motivating for young learners. Let’s face it: we enjoy activities better when we are good at them; this is especially true for younger children. So help make the process rewarding by making connections between letters, sounds, and your child’s prior knowledge. Rather than introducing the letters in alphabetical order, introduce high-frequency letters first, like the letters in your child’s name.

Your child’s name is a great place to start. Letters B, A, T, M, and H, are also good letters to teach in the beginning because they can be used to make easy words like “bat”, “cat”, “mat”, and “hat.” Teaching your child how to use letters that help them make small words will lead to progress quicker than teaching the ABCs in alphabetical order.

When introducing a letter, make sure to model three specific elements:

For example, we don’t teach the letters in alphabetical order, but in a high-frequency sequence that allows the child to get to read words as soon as possible. We also introduce letters with the uppercase and lowercase form and the letter sound, and our lessons include tracing & writing practice of new letters as they’re introduced. Space Trace (another game that unlocks in the program) is all about that extra tracing practice for letter recognition

Because children typically have short attention spans, it is crucial to keep the learning process fun and to mix things up. That’s why we have a variety of strategies you can use to teach your child the ABCs. Begin by introducing a few letters to your child. The letters A and T are good to start with because many words have the “at” sound in them (cat, bat, sat, mat).

Introduce Letters in a Visually Appealing Way: Simply writing the letter “A” with a pencil isn’t that exciting for young learners. Use colored pencils or markers to show your child new letters. Colorful posters, charts, or letter print-outs can also be great supplementary content. Allowing your child to color in large outlines of letters will help them become familiar with the specific shape of the letter. Raising Readers by Reading.com offers lessons that include tracing and writing practice of new letters as they’re introduced. Space Trace is a Reading.com game that gives children extra practice for letter recognition.

Use Physical Letters: If possible, pick up some block letters from the store. Children will benefit from being able to physically feel the curves and straight lines that compose the different letters, as opposed to just seeing them visually. Block letters also allow your child to play with letter combinations before they can write the letters.

Make the Process Fun: Happiness is truly contagious; if you’re excited about teaching the alphabet to your child, they’re more likely to get excited, too. Luckily, there are also some great games available to help you get your child excited about learning the ABCs. Hungry Cloud is a free fun game your child can use to develop letter recognition skills.

Incorporate Alphabet Instruction in Daily Activities: Your alphabet instruction might only last 20 minutes or so per day, but you can sneak in subtle learning opportunities all day. For example, if your child is going to have berries for a snack, give them berries and say “buh buh berries” to focus on the Bb sound.

While reading is largely a process of decoding language, we can’t ignore the encoding process that children use to communicate. In regards to literacy, decoding is a skill that allows learners to see arbitrary signs (letters) and make a connection to their meaning. Basically, it is the process of recognizing a word by applying knowledge of letter-sound correspondence to pronounce a word and match it to a known word in one’s spoken vocabulary. Encoding is the process of using one’s knowledge of letter-sound correspondence to spell and write a spoken word. Decoding and encoding skills may seem different, and they are, but the two build off of each other in productive ways (Freeman 2014).

So, how does encoding fit in with alphabet instruction?

As children learn to physically create the letter symbols, they make stronger connections to the letter which helps them remember the letter and sound relationship (Freeman 2014). As you introduce new letters to your child, have them practice writing the letters by hand.

How to Practice Writing the ABCs

Use primary paper with guidelines to help your child correctly write new letters. There are dozens of free writing practice pages you can print out for free, or you can make the guidelines by hand. You only need to draw two solid lines with a dotted line in the middle to create guidelines. The first section should contain dotted letter outlines of letters for your child to trace so that they can get used to writing the lines and shapes.

You now have a variety of general principles and strategies to use as you teach your child to recognize the alphabet. One of the most important things to take away is that the process has to be enjoyable for your child. You can make the learning process fun by using games, colorful pictures, and songs. Our alphabet song is a great way to promote letter recognition in a fun and engaging way. 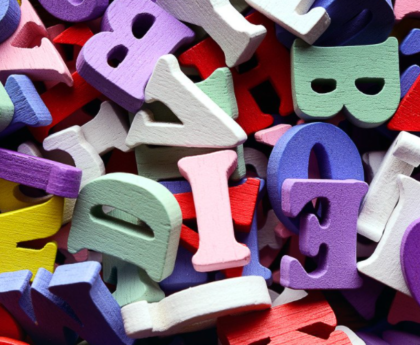